Please login to get an access to more data.

In case of fibre optic high bitrate transmissions the purity of optical interfaces along the whole optical link is essential to provide a reliable optical transmission performance. When the optical signal transmitted through the single mode fibre exceeds the power of 200 mW (23 dBm), the dirty connector interfaces may cause severe damage to the fibre. This phenomenon is called fibre core pitting effect. 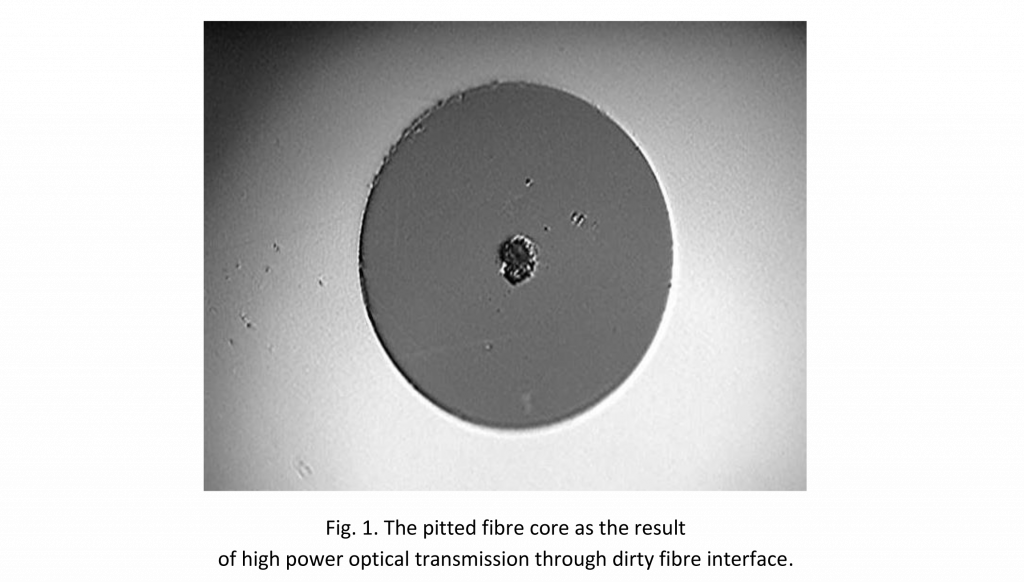 The reason for this are burning particles of dirt that are deposited on fibre core surface. With high power optical transmission even the smallest dust particles, invisible under microscope, burn and damage the fibre. This effect appears due to very high power density on surfaces of mated fibre cores. The power density on the surface of a fibre core with 9 μm diameter transmitting the optical signal with the power of 1000 mW (30 dBm) reaches the value of 16 mW μm2. The natural way to eliminate the problem could be to keep the connectors perfectly clean. This anyway is impossible in practice. The only effective way to eliminate the fibre core pitting effect, when high power optical signals are transmitted, is application of single mode connectors with extended fibre core interface diameter. The technology of extended beam high power fibre interfaces has been developed and implemented by the Swiss company Diamond. The ferrules with built in sections of graded index fibres provide extension of fibre core interface surface from 64 μm2 to 1260 μm2.

Using Diamond Active Core Alignment technology a very low values of Insertion Loss can be achieved for the PS interfaces by aligning the fibre angle at the ferrule end face. This technology can be applied to most connector interfaces, but due to safety reasons it is suggested to use it with E-2000™ and F-3000™ connector housings which are equipped with integrated metal protection caps and shutters.

Specifications of the PS optical interface:

Scroll back to top